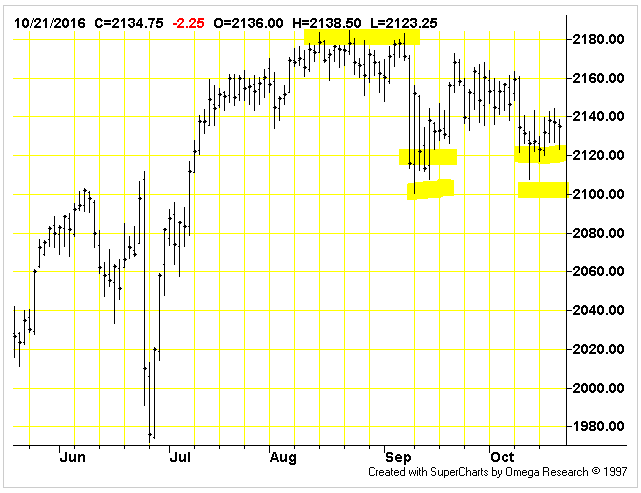 The above chart clearly shows a strong support zone between 2100-2120 for the S&P500 futures. They have bounced back from this support zone twice in recent days, so we can expect an upmove of 40-50 points from the support zone of 2100-2120 before any fresh selling pressure gets applied by the short sellers. So potential upside target is 2150-2160. We can be sure that there short sellers because many fund managers will try to hedge their equity portfolios by shorting the S&P500 Futures. And then there will be some naked short sellers who are convinced of lower targets after US Elections in November 2016. Therefore, we have to book trading profits in the 2150-2160 range without becoming greedy. A real long trade with high conviction can start only above 2200, which will then involve massive short covering and immediate target in that case would be 2240. We will discuss that trade when we get there. There are many roadblocks before that, because the daily charts are showing that medium-term market trend is down until 2180 is crossed.

Bollinger Bands Indicator: They are indicating an overbought market. An overbought reading occurs when the close is nearer to the top band than the bottom band. Volatility appears to be declining, as evidenced by a decreasing distance between the upper and lower bands over the last few bars. The market is in overbought territory.

RSI Indicator: RSI is in neutral territory. (RSI is at 46.52). This indicator issues buy signals when the RSI line dips below the bottom line into the oversold zone; a sell signal is generated when the RSI rises above the top line into the overbought zone. RSI is somewhat oversold (RSI is at 46.52). However, this by itself isn’t a strong enough indication to signal a trade. Look for additional evidence here before getting too bullish here.

Commodity Channel Index (CCI) Indicator: CCI (-68.90) is in neutral territory. A signal is generated only when the CCI crosses above or below the neutral center region. CCI often misses the early part of a new move because of the large amount of time spent out of the market in the neutral region. Initiating signals when CCI crosses zero, rather than waiting for CCI to cross out of the neutral region can often help overcome this. Therefore CCI is currently bearish, and this bearish view will be reversed when the CCI crosses above zero.

Disclaimer: The above technical analysis is only for sharing our current market view. It is not meant to provide any investment or other professional advice.