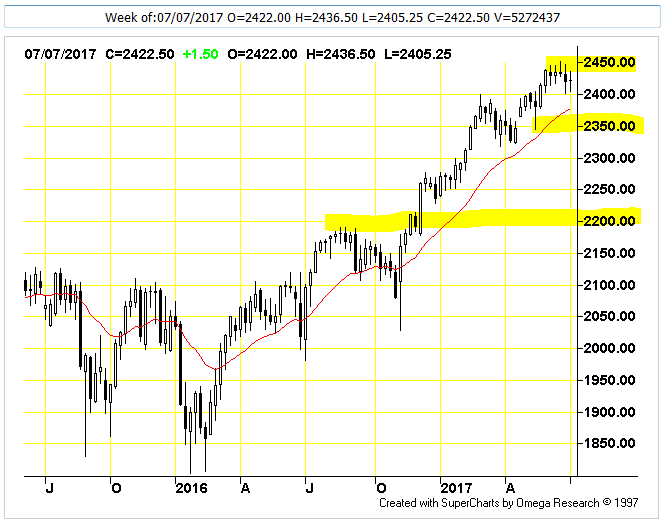 The above weekly chart of S&P500 futures show clear resistance at 2450 level, which the futures have not been able to cross in last 6 weeks, despite regular attempts.The futures have closed this week in the middle of the 2400-2450 range, which has been holding up in recent weeks. The futures have strong support at 2350 and 2200 levels. While 2350 may not hold in case of strong selling pressure, we can expect 2200 to hold despite selling pressure.

Moving Average Indicator:  The market has been extremely bullish in recent weeks, however currently the market is consolidating at 2420-2430 level for last 6 weeks. This is bullish and positive for the long side trades. Any dips towards 2400-2410 can be used for buying. In fact all rates below 2420 are good buying opportunity, because 2440-2445 is most likely to come in July again, giving 20-25 points gain.

Commodity Channel Index (CCI) Indicator: The CCI (83.47) is in neutral territory. A signal is generated only when the CCI crosses above or below the neutral center region. CCI often misses the early part of a new move because of the large amount of time spent out of the market in the neutral region. Initiating signals when CCI crosses zero, rather than waiting for CCI to cross out of the neutral region can often help overcome this. Given this interpretation, CCI (83.47) is currently long. The current long position position will be reversed when the CCI crosses below zero.

RSI Indicator: RSI (65.48) is in neutral territory. The RSI indicator issues buy signals when the RSI line dips below the bottom line into the oversold zone; a sell signal is generated when the RSI rises above the top line into the overbought zone. However, this by itself isn’t a strong enough indication to signal a trade. Look for additional evidence before getting too bearish here.