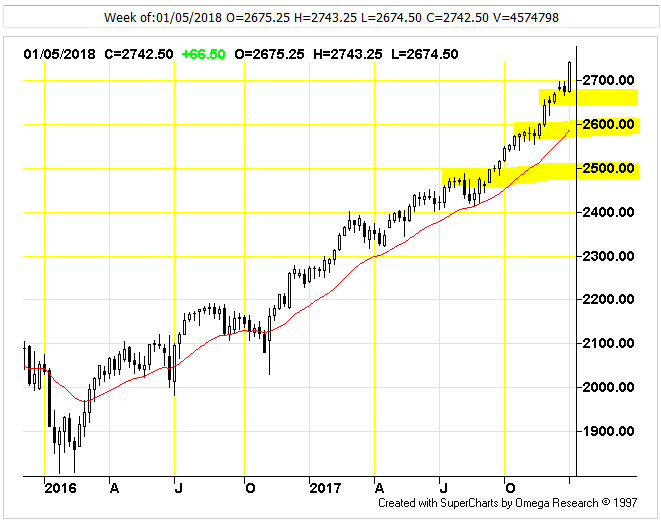 Summary: The S&P500 futures are bullish on multiple indicators, and they can move up further before selling pressure can prevail. The S&P500 futures closed this week at 2742.50, and 2780 is the next upside target. It may come within next 1-2 weeks because the futures are moving up with high momentum, and the gradient of the current move is nearly vertical. It also seems to indicate that we are in some late stage of this bull market rally, where greed is all around, and fear is nowhere in sight. The major support levels are at: 2680, 2580, 2500.

Moving Average Indicator: Price is above the 20 day moving average so the market trend is up. Only long positions are needed. No question of short positions.

Bollinger Bands Indicator: The Bollinger Bands are indicating an overbought market, which occurs when the close is nearer to the top band than the bottom band. Volatility appears to be picking up a bit, as evidenced by an increasing distance between the upper and lower bands over the last few bars. The market appears overbought, but may continue to become more overbought before reversing. Given that we closed at a 45 bar new high, the chance for further bullish momentum is greatly increased. Look for clear evidence of price weakness before taking any bearish positions based on this indicator.

Commodity Channel Index (CCI) Indicator: The CCI (155) recently crossed above the buy line into bullish territory, and is currently long. This long position should be liquidated when the CCI crosses back into the neutral center region. CCI often misses the early part of a new move because of the large amount of time spent out of the market in the neutral region. Initiating signals when CCI crosses zero, rather than waiting for CCI to cross out of the neutral region can often help overcome this. Given this interpretation, CCI (155) is currently long. The current long position position will be reversed when the CCI crosses below zero. The market just reached a 45 bar new high, adding bullish pressure.

RSI Indicator: RSI has issued a bearish signal (RSI is at 86.21). When RSI crosses above the overbought line (currently  set at 80.00) a sell signal is issued. While RSI is in overbought territory (RSI is at 86.21), the market may continue to become more overbought before a top is established, particularly given the 45 bar new high here. Look for a downturn in RSI before taking any bearish positions based on this indicator.

Open Interest Indicator: Open Interest is in a downtrend based on a 9 bar moving average. While this is normal following delivery of nearer term contracts, be cautious. Decreasing open interest indicates lower liquidity, and lower willingness to participate at current levels. So don’t expect buyers to come in readily on small corrections.

Slow Stochastic Indicator: The SlowK line crossed above the SlowD line; this indicates a buy signal. The stochastic is in overbought territory (SlowK is at 96.05); this indicates a possible market drop is coming. The long term trend is UP. The short term trend is UP. Even though the stochastic is signaling that the market is overbought, don’t be fooled looking for a top here because of this indicator. The stochastic indicator is only good at picking tops in a Bear Market (in which we are not). Exit long positions only if some other indicator is giving a strong sell signal.