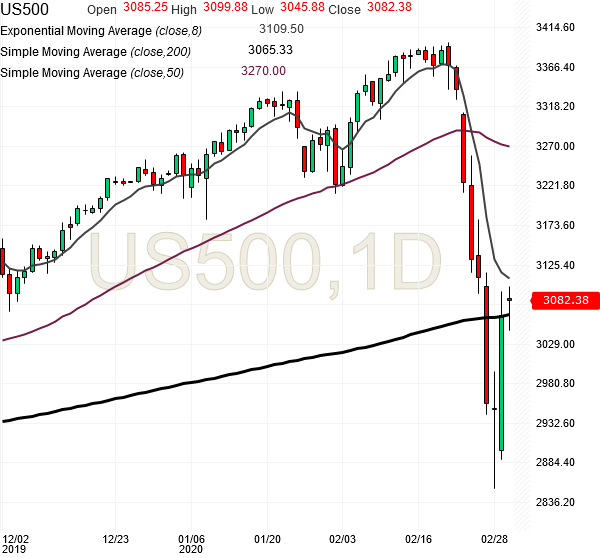 Every day is a 100+ point day in range these days!
The futures moving up and down 50 points within 30 minutes- very high volatility.

So it was worth taking a follow-on trade at 2950 despite getting hit with a Stop loss, because 3050 target was reliable (200 day SMA retest), and it came within a 24 hours of reversal from lower levels.

That target was hit 2 hours back. While 3130 was visible as a target, it could not be easily packaged into a trade. That’s why I didn’t send a new Optional Trade.

Main news of today is this:
US Fed announced 50 bps rate cut, to help the US economy during next few months, which will also support the efforts of other Central Banks.
https://www.investing.com/news/economy/federal-reserve-cuts-rates-by-05-in-surprise-move-to-combat-coronavirus-2099833

Across the market, millions of stop losses would have happened in last one week.I will share a very interesting chart in a followup mail. You need to see that.

There is no new Optional Trade currently, but once the futures close above 3060, we can get some new trades. There are no General Trades anyway. They will be possible after volatility comes down. Thanks.

P.S. When I started writing this mail, the futures were at 3040, and they hit 3080, and they are back at 3040 again by the time you finish read this mail. High volatility!