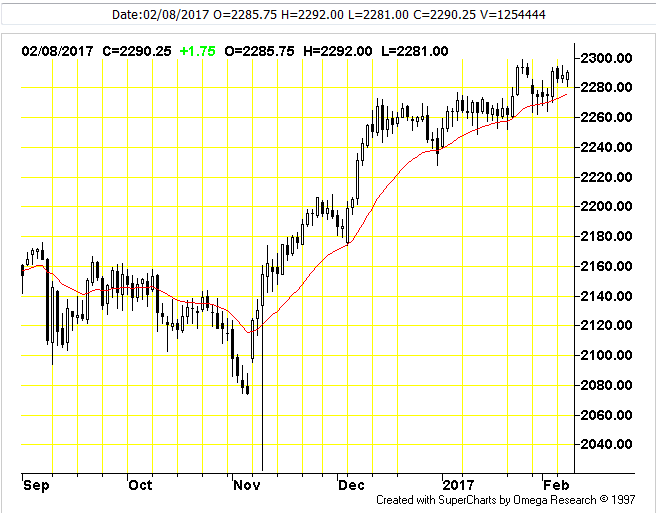 Summary: Once the S&P500 Emini futures start moving above 2292, it means that the support at 2280 has got tested successfully in the last 2-3 days, and the futures have absorbed the selling pressure that was coming around 2290 level. Therefore a new long trade can be taken above 2292.

Bonus Trade:
Buy Emini Futures at/above 2292 with Target 2305 and Stop loss 2280.
The same trade has also been given as an optional trade to our subscribers.

Technical Analysis of S&P500 Emini Futures – 08 Feb 2016
Bollinger Bands Indicator: The Bollinger Bands are indicating an overbought market. An overbought reading occurs when the close is nearer to the top band than the bottom band. Volatility appears to be declining, as evidenced by a decreasing distance between the upper and lower bands over the last few bars. The market appears overbought, but may continue to become more overbought before reversing. Look for some price weakness before taking any bearish positions based on this indicator.

Moving Average Indicator: The market is bullish because the fast moving average is above the slow moving average. In the recent weeks, the S&P500 has been very bullish, however in the last few days the index has lost some of its bullishness due to the following: the slow moving average slope is down from the previous bar. Its possible that we may see a market pullback here, and such a pullback maybe a good buying opportunity. The Market trend is UP and traders should consider long traders.

RSI Indicator: The RSI is in neutral territory (RSI 62). This indicator gives buy signals when the RSI line dips below the bottom line into the oversold zone; a sell signal is generated when the RSI rises above the top line into the overbought zone. RSI is somewhat overbought (RSI 62). However, this by itself isn’t a strong enough indication to signal a trade. Look for additional evidence before getting too bearish here.

ADX Indicator: ADX measures the strength of the prevailing trend. A rising ADX indicates a strong underlying trend while a falling ADX suggests a weakening trend which is subject to reversal. Currently the ADX is falling. The long term trend, based on a 45 bar moving average, is up. However, a falling ADX indicates that the current trend is weakening and may possibly reverse. Look for a choppy market ahead.

Commodity Channel Index (CCI) Indicator: CCI (85.60) has crossed back into the neutral region, issuing a signal to liquidate long positions and return to the sidelines. CCI often misses the early part of a new move because of the large amount of time spent out of the market in the neutral region. Initiating signals when CCI crosses zero, rather than waiting for CCI to cross out of the neutral region can often help overcome this. Given this interpretation, CCI (85.60) is currently long. The current long position position will be reversed when the CCI crosses below zero.

Disclaimer: The above analysis of S&P500 Emini Futures is only for sharing our technical analysis. It is not meant to provide investment advice.