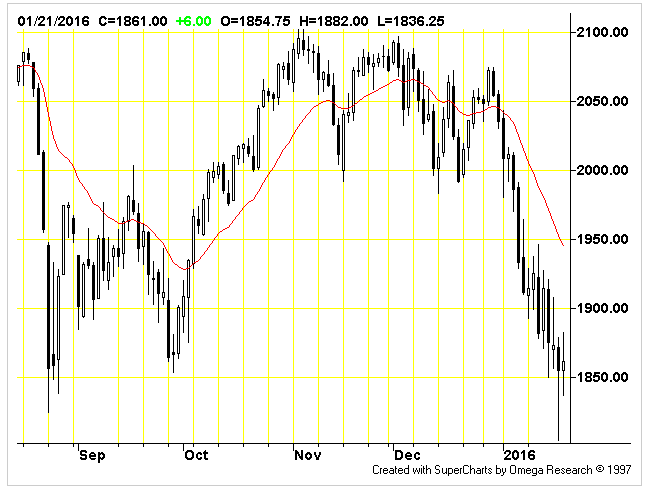 Today was a bullish candlestick within a relatively tight range (almost a doji), which  arrested all selling pressure, and today’s high is higher than yesterday’s high, indicating willingness to go up, if market conditions become favorable. If the S&P500 futures open with a gap up tomorrow (Friday, 22 Jan 2016), then there is a high probability of a good upmove tomorrow, as a result of two bullish candles on previous two days. The immediate target on futures is 1900, which may come in the next 1-2 trading sessions.

CCI Indicator Analysis
Conventional Interpretation: CCI (-104.54) recently crossed below the sell line into bearish territory, and is currently short. This short position should be covered when the CCI crosses back into the neutral center region.

Additional Analysis: CCI often misses the early part of a new move because of the large amount of time spent out of the market in the neutral region. Initiating signals when CCI crosses zero, rather than waiting for CCI to cross out of the neutral region can often help overcome this. Given this interpretation,CCI (-104.54) is bearish, but has begun showing some strength. Begin looking for an attractive point to cover short positions and return to the sidelines, or initiate long positions in a phased manner.