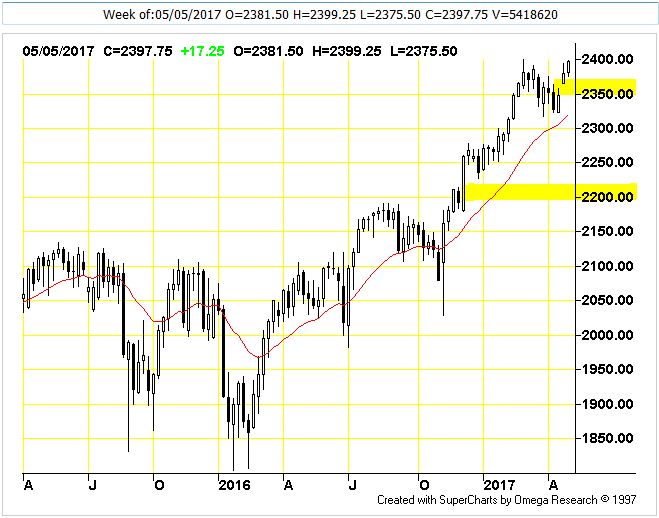 Notes: The above weekly chart is indicating an upmove above 2400 in the coming days/weeks. Major supports on this weekly chart are visible at 2350 and 2200 levels. There is a decent probability of a retest of 2200 sometime in the next 6-12 months, because 2200 was not tested properly on the way up, and the S&P500 usually tests each key level multiple times before making long term upmove above that level.

Technical Analysis: Many technical indicators are indicating an overbought market in the short term, but with clear possibility of higher prices in the coming weeks. 2400 is most likely to be crossed again. One concern is that volume is not rising with new highs, which means that these higher levels are not getting market-wide participation, and therefore we may see some correction in order to get new investors on board.

Moving Average Indicator: The market is bullish because the fast moving average is above the slow moving average. Everything in this indicator is pointing to higher prices.

Commodity Channel Index (CCI) Indicator: CCI (101.45) has crossed into the bullish region, issuing a buy signal. CCI will signal liquidation of this position when the CCI value crosses back into the neutral center region. CCI often misses the early part of a new move because of the large amount of time spent out of the market in the neutral region. Initiating signals when CCI crosses zero, rather than waiting for CCI to cross out of the neutral region can often help overcome this. Given this interpretation, CCI (101.45) is currently long. The current long position position will be reversed when the CCI crosses below zero. Adding bullish pressure the market just reached a 45 bar new high.

Bollinger Bands Indicator: They are indicating an overbought market. An overbought reading occurs when the close is nearer to the top band than the bottom band. Volatility appears to be picking up a bit, as evidenced by an increasing distance between the upper and lower bands over the last few bars. The market appears overbought, but may continue to become more overbought before reversing. Given that we closed at a 45 bar new high, the chance for further bullish momentum is greatly increased. Look for some price weakness before taking any bearish positions based on this indicator.