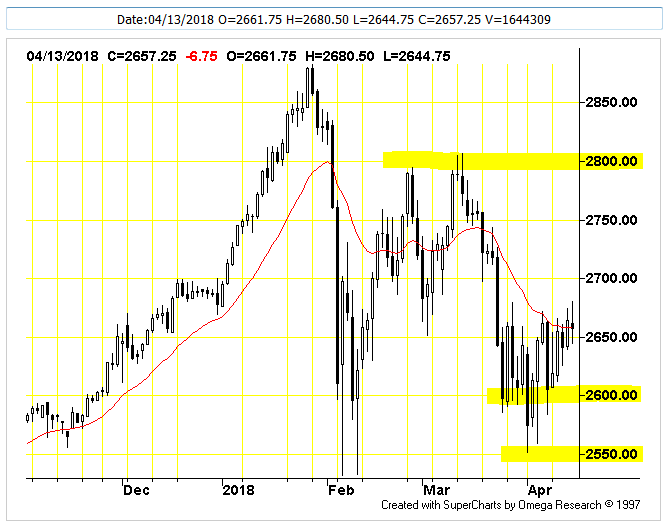 The S&P500 Emini Futures have been building a base at 2600 level and they defended it well this week, closing above 2650 this Friday, indicating strength and willingness to go higher. There is clear resistance at 2680, and the clear long trades will start above 2680.

Open Interest is in a downtrend based on a 9 bar moving average. While this is normal following delivery of nearer term contracts, be cautious. Decreasing open interest indicates lower liquidity.

RSI (48.70) is in neutral territory. This indicator issues buy signals when the RSI line dips below the bottom line into the oversold zone; a sell signal is generated when the RSI rises above the top line into the overbought zone. RSI is somewhat oversold at 48.70. However, this by itself isn’t a strong enough signal. We need to look for additional evidence here before getting too bullish here.

CCI (15.41) is in neutral territory. A signal is generated only when the CCI crosses above or below the neutral center region. CCI often misses the early part of a new move because of the large amount of time spent out of the market in the neutral region. Initiating signals when CCI crosses zero, rather than waiting for CCI to cross out of the neutral region can often help overcome this. Given this interpretation, CCI (15.41) is currently long. The current long position position will be reversed when the CCI crosses below zero. The market just signaled a bearish key reversal off a 9 bar new high, suggesting closing any long positions here.

Summary: The technical indicators are giving mixed signals at current level. So are bullish and some are bearish. This is logical and along expected lines because the S&P500 index is just above 200 day SMA at 2600 level, and the index has been testing the 2600 level every week. Below 2600 level, many indicators will turn bearish. So far the S&P500 index has been closing above 2600 on weekly basis, which indicates strength.  The S&P500 is building a base at 2600 level, which can enable the next upmove to 2800-2900 level.

[Bonus Trade]: Buy Emini Futures at 2630 for Target 2660 with Stop loss 2610.
Similar trade was done this week, and it can be done again in the coming week.
Our S&P500 Emini Futures Trading strategy is to remain long above 2600. Thanks.