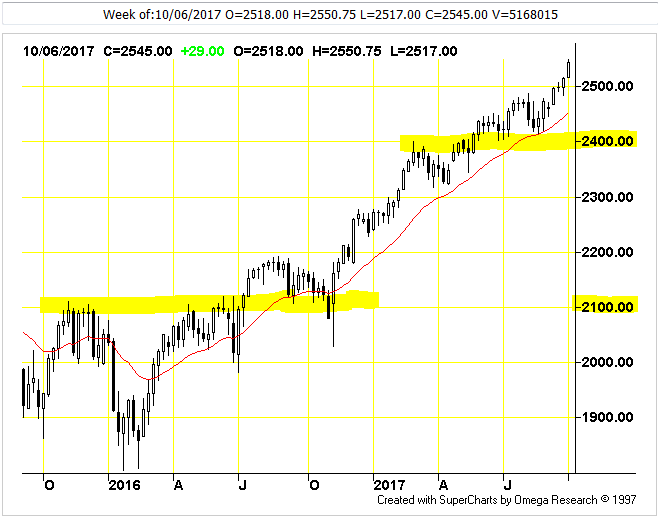 Moving Average Indicator: The S&P500 Emini futures have been consistently above the 20 week moving average, so the trend is clearly up and the market will be strongly bullish above 2500 level.

Commodity Channel Index (CCI) Indicator: CCI (213) recently crossed above the buy line into bullish territory, and is currently long. This long position should be liquidated when the CCI crosses back into the neutral center region. CCI often misses the early part of a new move because of the large amount of time spent out of the market in the neutral region. Initiating signals when CCI crosses zero, rather than waiting for CCI to cross out of the neutral region can often help overcome this. Given this interpretation, CCI (213) is currently long. The current long position position will be reversed when the CCI crosses below zero. Adding bullish pressure the market just reached a 45 bar new high.

Slow Stochastic Indicator: It is in overbought territory (SlowK is at 94.86); this indicates a possible market drop is coming. The long term trend is UP, and the short term trend is also UP. Even though the stochastic is signaling that the market is overbought, don’t be fooled looking for a top here because of this indicator, because the stochastic indicator is only good at picking tops in a Bear Market (in which we are not). Exit long position only if some other indicator tells you to, or if a key support level like 2500 breaks.

Disclaimer: The above analysis is meant solely for the understanding of technical analysis of the S&P500 Emini Futures. It is not meant to provide any investment advice.